So What is Replication

Replication means data being copied from the primary (the master) MySQL server to one or more secondary (the slaves) MySQL servers, instead of only stored in one server. One can use secondary servers for reads or administrative tasks. The following figure shows an example use case:

It is a traditional asynchronous replication of MySQL servers in which there is a primary server and one or more secondary servers.

Then, each of the secondaries -

Here, the commit on the primary and the commits on the secondaries are all independent and asynchronous.

There is a semi-synchronous variant of the above asynchronous replication. It adds one additional synchronous step to the protocol.

After each secondary has returned its acknowledgment

The following figure tells about this.

In a group, every server may execute transactions independently. Any read-write (RW) transaction is committed only if the group members approve it. But the read-only (RO) transactions have no restriction and so commit immediately. That means the server at which a transaction is executed sends the rows with unique identifiers to the other servers. If all servers receive these, a global total order is set for that transaction. Then all server apply the changes.

In case of a conflict (if concurrent transactions on more than one server update the same row), the certification process detects it and the group follows the first commit wins rule.

So, the whole process is as follows:

And the other servers -

The steps from 3 to 5 in the originating server and all the steps in the other servers are followed if all servers have reached consensus and they certify the transaction.

According to Ramesh Sivaraman, QA Engineer and Kenny Gryp, MySQL Practice Manager, Oracle MySQL developed Group Replication as MySQL server plugin that provides distributed state machine replication with strong coordination among servers. Servers coordinate themselves automatically as long as they are part of the same replication group. Any server in the group can process updates. Conflicts are detected and handled automatically. There is a built-in membership service that keeps the view of the group consistent and available for all servers at any given point in time. Servers can leave and join the group and the view will be updated accordingly.

A simple group architecture where three servers s1, s2, and s3 are deployed as an interconnected group and clients communicate with each of the servers has been shown below: 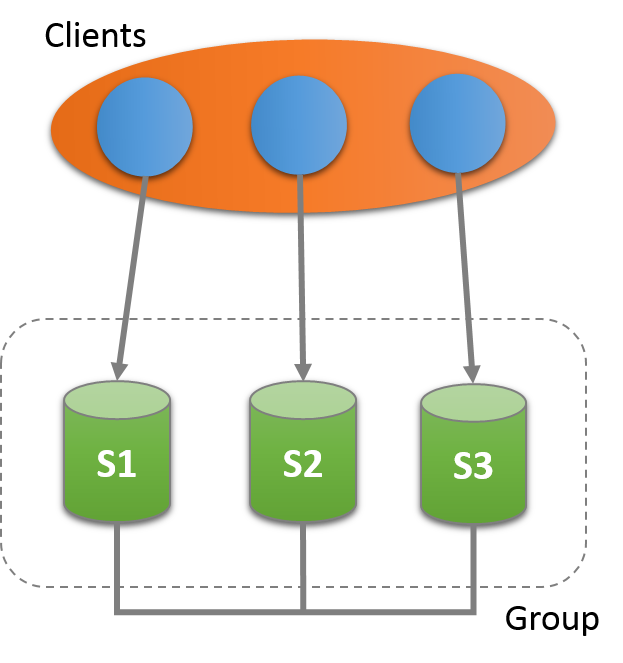 Group Replication builds on some services.

Basically, when server A does not receive any message from server B for a given period, then a timeout occurs and a suspicion is raised telling that server B is dead. The failure detection mechanism which is responsible for this whole process.

More on this here.

It is a built-in membership service that monitors the group. It defines the list of online servers (view) and thus the group has a consistent view of the actively participating members at a time. When servers leave and join the group and the group view will be reconfigured accordingly.

MySQL Group Replication requires a majority of active servers to reach quorum and make a decision. Thus there is an impact on the failure number that a group can tolerate. So, if the majority for n is floor(n/2) + 1, then we have a relation between the group size (n) and the number of failures (f):

In practice, this means that to tolerate one failure the group must have three servers in it. As such if one server fails, there are still two servers to form a majority (two out of three) and allow the system to continue to make decisions automatically and progress. However, if a second server fails involuntarily, then the group (with one server left) blocks, because there is no majority to reach a decision.

The following is a small table illustrating the formula above.